Depending on where you’re from and who you ask, you may have seen up to five big recessions in the past three decades. We’ve certainly seen three within the UK alone. As such, businesses going through the processes around recessions are nothing knew . However, the one brought on by the coronavirus may be a little unusual, as the timescale is different from many in recent memory. Other recessions have tended to span for a number of years with the impact being spread, where as the recession that is expected to be brought on by the coronavirus has happened extremely quickly. But what happens to exhibitions during recession times? Let’s find out…

What happens to exhibitions during recession?

Despite the waves of recessions that have been experienced, the exhibition industry remains to be a resilient one – and those who support exhibitions continue to find a foothold following periods of downtime too. Business exhibitions, trade shows, and bigger events have become a cornerstone of the modern business as they provide an opportunity for networking, and an opportunity to show progression. These exhibitions allow for a business to display themselves loud and proud – banners and exhibition stands make them stand out amongst their competition and these bigger events are something that will remain unlikely to change.

Technology has also been a big reason for the success of many of these events during a recession period too. The ability to move to a digital platform to begin a demonstration have given the ability to remove some of the constraints of a physical location requiring a huge gathering – which in this situation is essential. History has shown however that the industry requires the continued attendance at these bigger events such as trade shows in order to stay afloat. But as social distancing measures continue and efforts to stay on lockdown continue this is an increasingly difficult proposition.

One benefit here is that attendee interest has seen a big increase year on year. Although attendance numbers have seen a dip and will likely see a dip following a return to normality, those who do attend engage in a bigger way than ever before such as showing interest and asking questions. The industry has previously shown a quick bounce-back following economic downturn too, as those who have struggled throughout a recession may be eager to get back to trade shows and exhibitions in an effort to bump numbers back up again, but to also offer a more loose form of advertising which has a higher interaction rate than other forms. 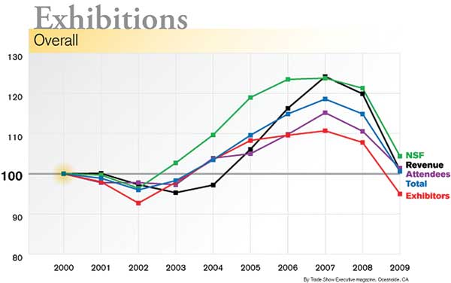 It will take some time before the full impacts of the upcoming recession are felt. Typically there is a longer build up with a period following the recession where recovery can be seen. During the last big recession in 2008, this was a sharp drop quickly followed by recovery in the second half of 2009 and early 2010. Experts are still hoping the upcoming recession will be a fast V shaped downturn and we’re beginning to see some good signs as countries who were hit hardest are now beginning to lift some lockdown measures and return to normalcy, but as the spread has been staggered we may see some fast recovery in some areas whilst others continue to move through the process.

It’s still too early to tell, and whilst all bigger events are now completely on hold, event organisers will be looking ahead to monitor changes in social norms such as social distancing to see just when these bigger events can get underway again, and when the event halls can once again be filled with those looking to promote their business and products.