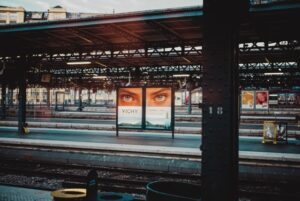 These offline advertising strategies can vary in many ways. They can be multi-tiered approaches using exhibition stands to deliver a message to a large audience, large billboards to gain attention, or the scribbling of a pen:

Starbucks have been one of the most successful companies at conducting a long standing offline advertising method. The simple act of scribbling a name on to a cup of coffee as a method of identification offers a personalised feel. Of course the drink has been made specifically for them, but the handwritten touch offers just a little more – combine that with the clear logo branding on transparent plastic cups, it serves as a very simple but effective strategy.

Coca-Cola were able to do something in a very similar vein as they began to print names directly on to the labels of the bottles. Now when you go to pick up a refreshing bottle of fizzy drink, you can directly pick out your own name – their advertising strategy even led to sharing as the messages on the bottles suggest buying one to share with your friends name on the bottle.

Back in 2018, Greggs were able to launch a successful offline advertising campaign with the simple act of reversing some outdoor signage. Whilst it relied on the spread of images via social media, the unique approach did get people talking. The signage was reversed on a busy high street, so when foot traffic would pass by on the opposite side of the street, the logo could be seen reflected in the windows. This had been doubly effective once it was found that those who would take pictures in front of this window would have the reflected sign in clear display serving as a genius advertising move with the simple act of reversing a sign.

We’ve also seen methods that move away from visual methods become increasingly successful as both reputation and tactile representation can serve as a powerful tool too – think of toys from Kinder Eggs or Happy Meals, they’re easily recognisable and serve in much the same way that other forms of merchandising might, by physical representation that can be seen by others and influence them. Others such as IKEA have built a reputation for being a fun family outing that can be an experience of its own. These alternative offline forms of advertising may not seem as traditional, but have also been just as successful at the goal to spread a business name, and to build a certain reputation around that name also.

Offline advertising methods are something that can’t be ignored even in the digital advertising era. For example, business cards can tell a story of their own as in some cultures it is still considered a physical extension of both yourself and your business and a well designed card can still serve as a powerful advertising tool. Similarly, trade shows and business events are still an incredible way to network and to spread your name and with traditional advertising tools such as large outdoor banner stands, you can make yourself stand out from the crowd.