​Which font to use on Roller Banners

With so many fonts available to download, sometimes free of charge, it can be tempting to indulge your creative side by wanting to use some of the more unusual fonts on your business signage. However, there is a reason professional graphic design artists stick to a few well-known, classic fonts and this is because they know they work. So, which font to use on roller banners? We find out… 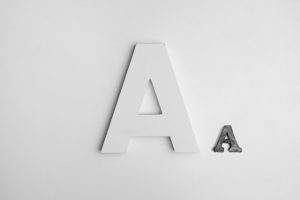 Which font to use on Roller Banners: a guide

So, which font is the best choice for your advertising signage? Before talking about fonts it is worth bearing in mind that banners are usually used to attract potential customers attention form a distance. Therefore when designing banners it is a good idea to keep the amount of text to a minimum. Use short sentences and text which will grab peoples attention and leave the fine details to your leaflet or brochure.

Printed advertising such as Large banners, posters and roller banners, are already oversized, so it follows that the font needs to be similarly large, but size is not an excuse for embellishment. There are several different types of fonts, but not all of them are suitable for large signage. The first is serif, of which Times New Roman is a good example. Serif fonts are very easy to read and are best used when there is a lot of text present. Sans-serif is the second, and includes the font Helvetica. In appearance, sans-serif fonts are less fussy and cleaner, and are often used in large signage where the words are few and a big impact is needed. This makes Helvetica and other sans-serif fonts the ideal choice for large signage, such as roller banners.

Other fashionable choices for large displays are script and cursive fonts, such as Lobster Two. These two fonts are meant to replicate handwriting and so have a personal feel. However, on signage they should be used in moderation, as too much wording in either script or cursive will become difficult to read.

Helvetica and other sans-serif fonts are as good for small signage as they are for large, and are perhaps the best choice all round. Text fonts, such as Old English, should be avoided at all costs, as they are far too elaborate to be read quickly, and have an old-fashioned feel that is at odds with modern marketing.

Another choice for small signage, and indeed, large signage, is the use of novelty fonts. There are many of these, but most are designed around a theme, such as Halloween, or balloons. These can have impact, but like script and cursive fonts, should be used in moderation to avoid overwhelming the roller banner or other signage design.

There is specific etiquette with the use of fonts, especially when it comes to upper and lower case letters. The same rule that applies to text in emails and text messages applies to signage too, so avoid using wording that utilises only capitals to avoid “shouting.” We are used to reading words with capitalisation at the beginning of sentences, and lower case letters for the rest of the wording and it is not worth tampering with this accepted idea on your signage, not unless you use it to make a specific and relevant point.

The font you use on your marketing materials and signage is as important as the colours and design, so do not ruin a perfectly crafted visual layout with a poor choice of font! If you’re stuck on which font to use on roller banners, remember that we offer design packages, where a pro graphic designer can create your artwork for you – including the font!